The Story of Argan Oil 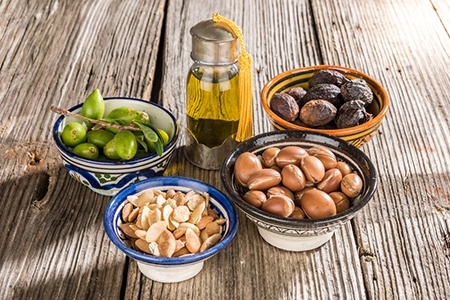 At the edge of the Sahara desert in southwestern Morocco stands the ancient argan tree. The tree is vital to the ecological balance in the region and guards against the encroaching desert. In 1998 much of the region was listed as a Biosphere Reserve by UNESCO. The argan tree is only found in Morocco. The tree produces a nut containing one to three argan oil-rich kernels.

The Berber women live in either the Sahara desert or the Atlas Mountain range in southern Morocco.  The Berber women faced with these harsh climates have for centuries manually extracted the oil and used it in its natural state as an anti-aging serum and skin moisturizer.  Berber women also use the oil for cooking and flavoring local dishes.

The Berber women call themselves “the free” and are fiercely independent.  They have led their men into war. The most famous, Kahena, the Veiled Queen of  Jerawa, fought against the occupying Arabs in a five year insurrection dying in battle in AD 702. Though the Berber women practice a unique form of Islam, some wear veils and some do not.  They can choose to divorce, retain their dowry and marry as many times as they like.  It has been said the Berber women were likely the Amazons of Diodorus Siculus.

Like those traditions followed for centuries by the Berber women of Morocco Tāne® organic argan oil is pure, fresh, 100% natural and 100% eco-friendly.  Only nuts with the shells intact and the pulp affixed are selected. This ensures each nut has been freshly harvested from the tree and was not consumed by goats, laying on the ground or otherwise compromised. These intact nuts are transported to a small village in Tiznit Province, Morocco. The women of the village who have learned the generational secret of preparing the raw product from their mothers, grandmothers and great grandmothers manually remove the pulp, crack open the nuts and sort the kernels. The kernels not considered of the highest production quality are discarded.

The selected kernels are transported to the production facility 70 miles from the village. There the kernels are cold pressed on a mechanical screw press to extract the oil. The extracted oil is decanted in steel containers for 20 days. The oil is then placed in glass bottles and the body butter in glass jars. This is done at the production facility. The product is air shipped to its destination where it is placed directly on the market. The oil and body butter are never stored or transported in plastic containers. The oil is 100% first cold pressed, unfiltered and food grade.

Tāne® employs free trade practices that directly benefit the women of Morocco.   The sale of Tāne® organic pure argan oil directly benefits the women of Morocco by providing a fair wage and a sustainable life to a disadvantaged segment of the population. The sale of Tāne® organic pure Moroccan argan oil also protects the biosphere by increasing the value of each and every tree, ensuring the forest will be well cared for in its stand against desertification.

The Story of Argan Oil was last modified: February 20th, 2017 by Tanepure.com